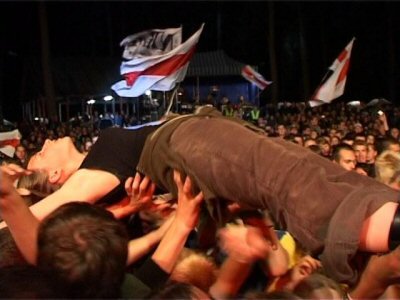 The film is in a way the continuation of the previous one entitled „A Lesson of Belarusian”, which showed a protest of young people against the recent fake presidential elections in Belarus. The protest got brutally pacified by militia forces. Despite that, young Belarusians did not give in; they keep fighting the regime. This time they use slightly different methods. Their weapons are music, humour and an ironic distance to the absurd reality. Each form of regime has two sides: the dangerous one and the ridiculous one. “Music Partisans” describes the latter.

(…)This year a lot of documentaries are saying, "Come on, we have a different story to tell from what you see on the news." The media is fragmented through different channels and broadcasters. There's so-called objectivity for ten minutes. That's how we form our opinion. Now filmmakers want the barricade. They want activism. Art as a weapon. (…) We're showing “Music Partisans”, set in Minsk's Kalinovski Square, about the bands playing music and political protests. It's by Mirosław Dembiński, who did “A Lesson of Belarusian”. I call him the Michael Moore of Belarus.

The director who has been making films about our Eastern neighbours over the last few years (“Dwarfs go to Ukraine”, amongst others) has managed to avoid a stereotype pattern. “Music Partisans” is not an ordinary documentary about protests in Belarus filled with archives of opposition demonstrators. This film blows you away. This is an energetic manifest of democracy, freedom of thought and speech.

“Music Partisans” is cinema which makes you think, which moves you and keeps you on the edge of your seat. Dembiński shows us modern partisans, young people who are fighting for important reasons. They are willing to make huge sacrifices, even though their goal seems to be unreachable.