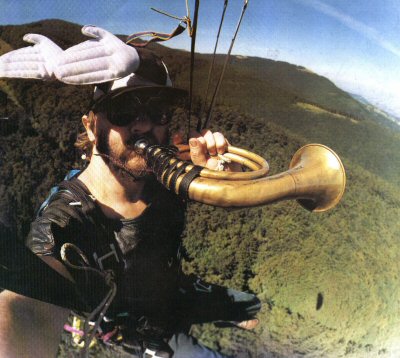 The portrait of Bogdan Kulka "the last free hang-glider pilot". He was one of the most colourful and at the same time one of the most controversial personalities among the Polish hang-gliders pilots. He was second awards winner in Coupe Icare 97, which was the Polish hang gliding biggest success. At the same time he was condemned for desperate flights at night, with rotors and in the mist. He was the author of considerate and refine articles in the “Aviation Review" and the creator of obscene puppets with fluttering genitals. A hard-working photographer, owner of two photo-labs and he was an absent-minded father of two boys, whose mother he did not manage to marry. He didn't because he died Icarus's death fascinated with the frantic spiral glide that he did not stop near the ground.

The film displays the pleasure of flying, tells about great adventures, satisfaction in life, about flying to fulfil your dreams and not for the number of kilometres flown. People – don’t be afraid to show your emotions during the ride.

I think it’s better to ask someone who is not associated with flying what he thinks about this film. I did that and to my surprise my friend got into flying. He claims that “Icarus” has ‘POWER’.