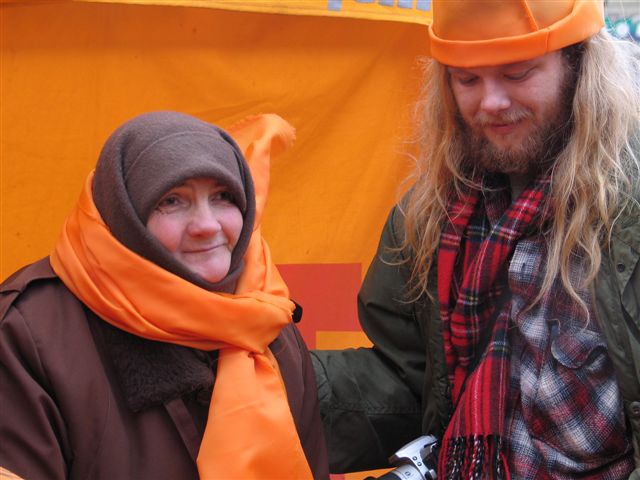 In the 80’s Polish dwarfs contributed to the ending of communism and Berlin Wall collapse. When the “Orange Revolution” began in Ukraine, the dwarfs took it upon themselves to support it - an orange bus left Warsaw heading towards Kiev. They took with them two chocolate heads; each representing the presidential candidates, Yushchenko and Yanukovich (so that the people could ‘taste of power’), a 200-metre long orange banner with supporting statements and an orange scarf which was knitted by Poles and Ukrainians on the way to. They hung the 15-metre long orange scarf around the neck of the new president of Ukraine.

Very simple in its structure the report turned out to be sophisticated and interesting, multi-faceted in its exploratory fashion and also a deeply moving documentary of what happened, whose historical significance cannot be overestimated. Mirosław Dembiński didn’t just give his own take on the historical fall but a passionate film plot, which unfolds along to recognizable Polish and Ukrainian beats, and culminates in two hundred thousand gathering in Independence Square in Kiev.

“An instrumental by a camera quartet”

Family gatherings, street demonstrations, the drama of election night and common scenes filmed by four cameras. Mirosław Dembiński presents an emotional one and a half-hour long documentary thrown together from 78 hours of footage.