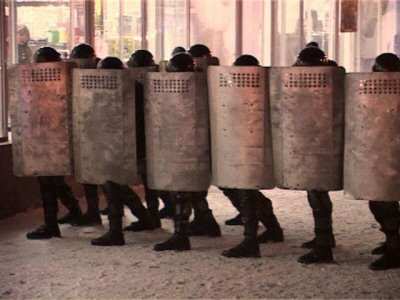 After the Soviet Union collapsed, Belarus became an independent country and a Humanistic Lyceum was founded in Minsk, with the aim of raising an elite Belarusian intelligentsia. However, in 1995, Lukashenka comes to power. Democracy and freedom come to an end. Also the Lyceum is labelled a banned institution. The Lyceum pupils do not give up though, but steadfastly keep studying in the underground. They are very intelligent and talented and express their critical attitude to their situation in many ways,  issuing  an  underground  paper and  recording  music, attending actively in opposition to Lukashenka. The presidential elections, for which Lukashenka changed the constitution in order to be elected for a third term, become the culminating point of the film. Despite the fear of repression, thousands of people enter the streets.  In the main square of Minsk, the Lyceum pupils join forces to build a tent city, which is then brutally pacified by militia. Hundreds of people end up in prison. However, the Lyceum pupils do not give up, they deeply believe that one day Belarus will be a free country.

„A Lesson of Belarusian” | LEIPZIG

With the film's vehement images of demonstrations and diverse civil actions by the young Belarusian generation, the film-maker teaches all of us a lesson. And the viewer witnesses more or less bewildered the excesses of a real existing dictatorship in the heart of Europe. The film is a plea, an outcry, and - at the same time - a cool-headed analysis of the daily turmoil of political struggle. Mirosław Dembiński succeeded in aligning cinematic means of the reportage with those of narrating a political documentary film in a way that deeply touches the viewer.

„A Lesson of Belarusian” | watch doc’s

Shocking but at the same time excellent, Dembiński’s documentary shows how, faced with disadvantage and repression, young people act. “A Lesson of Belarusian” is worth seeing. I recommend it to everyone, not just people who remember how our country was repressed, but all young people who want to know more about what was for our grandparents the freedom of the motherland.

„A Lesson of Belarusian” | gazeta.pl

Even before the Polish Premiere of “A Lesson of Belarusian” it was prize winning in Germany, but in Lukashenka’s country it begins to take on a life of its own distributed via home video recorders. The film is about Franak, who explains to his friend that she can change the world, about his friends who are learning Belarusian, even though it is forbidden to learn Belarusian in Belarus and also about the inhabitants of Minsk who, under onslaught from baton-wielding police on election night, scream for “liberty”.

„A Lesson of Belarusian” | watch doc’s

It’s in a good manner to decide whether it is worth seeing this film or not. I’ll honestly tell you: it’s at the top of your reading list.

„A Lesson of Belarusian” | Kino

It’s not the least bit surprising that a flawless and energetic narration and composition from a dramatic stance appeals to one’s compassion and solidarity. “A Lesson of Belarusian”, honestly moving, especially at the end, quickly captured the hearts of viewers and critics, winning last year, just after it was put together, many prizes and critical acclaim.

„A Lesson of Belarusian” | gazeta.pl

Dembiński presents conspired plots, demonstrations, the brutal pacification of civil protest from the core, from the viewpoint of young oppositionists resulting in a really emotional portrayal of the political situation in Belarus.

„A Lesson of Belarusian” | www.odkryjmybialorus.blox.pl

This film definitely warrants viewing because it deals with the basics of human life in a simple way.

„A Lesson of Belarusian” | www.kinomaniaki.pl

This is currently one of the best documentaries I’ve ever seen. Excellent scriptwriting, brilliant music and amazing power of revolutionaries’ slogans “freedom, equality, fraternity” emanating from the screen makes our cinematography something to be proud of when compared to other European nations. Bravo!”

„A Lesson of Belarusian” | www.merkuriusz.id.uw.edu.pl

This film is amazing. The best thing is that such young people are so aware of themselves and their nationality. They are ready to pay the price for defending what they believe in. The film is definitely worth recommending and everyone should go and see it.

„A Lesson of Belarusian” | www.ceo.org.pl

“A Lesson of Belarusian” at Wojkowice High School (students’ opinions)

The film was very moving. I honestly feel sorry for Belarusians. I would really like to help them. I think that after watching this, what’s happening over the garden fence, we appreciate how important freedom is.

After watching this film I was in shock. This is the 21st century and too little is said of this problem in Europe and Poland, which is a neighbor of Belarus. And it’s not as if our history is any different.